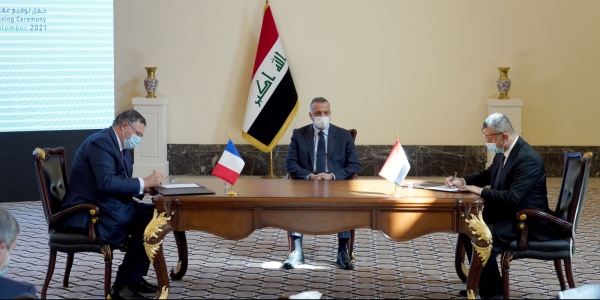 Iraq and TotalEnergies on Sunday signed four contracts that will see the French supermajor invest $27 billion to develop oil, natural gas, solar power, and a water project in the single largest foreign investment in Iraq in recent decades.

Details of the commercial terms remain unclear, but the deal represents a political win for Prime Minister Mustafa al-Kadhimi and Oil Minister Ihsan Ismaael just a month before national elections.

It also marks a much larger footprint in Iraq for Total, which has minority stakes in one contract with the Kurdistan Regional Government (KRG) and one in Missan province in southern Iraq. The four new projects rival ExxonMobil's now defunct multi-project deal that had been under negotiation for half a decade.

TotalEnergies did not issue a press release as would be customary for an investment of this size. The French energy giant has been negotiating contractual terms with the two ministries since signing a heads of agreement at the end of March.