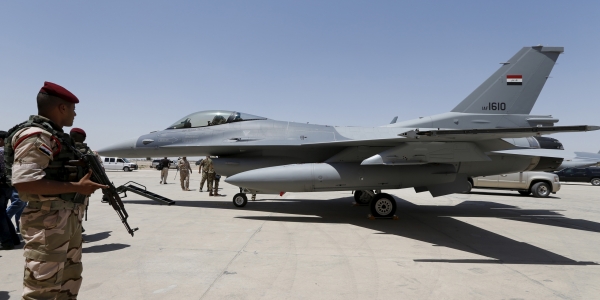 An Iraqi solider stands guard near one of four F-16 fighter jets delivered during an official ceremony from the U.S., at a military base in Balad, Iraq, July 20, 2015. (THAIER AL-SUDANI/Reuters)
Cathy Otten of Iraq Oil Report

Iraq's F-16 fleet is no longer flying missions as part of the international coalition against the so-called Islamic State (IS) group, according to two Iraqi officials and two coalition spokespersons — a consequence of the mismanagement and alleged corruption that continues to plague the program.

Iraq Oil Report previously reported that severe problems at Balad Airbase had crippled the F-16 fleet. By quietly dropping the Iraqi F-16s from its air tasking order, the U.S.-led Global Coalition to Defeat Daesh has effectively codified its assessment that the multi-billion-dollar program is no longer fit for combat.