Residents of Anbar and Ninewa feel solidarity with protesters denouncing the Iraqi government's chronic failures, but after years of trauma, they aren't staging demonstrations. 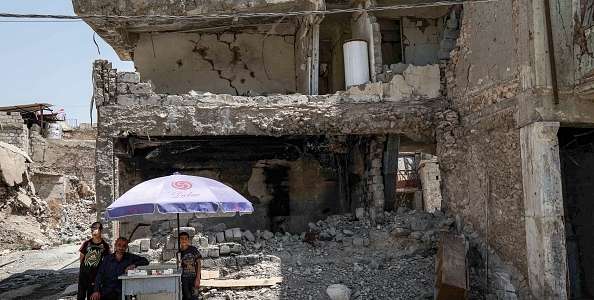 An Iraqi peddlar sells cigarettes at a stall under an umbrella past damaged buildings along a street in west Mosul on August 10, 2019. (SAFIN HAMED/AFP/Getty Images)
By Jamal Naji, Rawaz Tahir, Samya Kullab and Staff of Iraq Oil Report
Published Wednesday, October 9th, 2019

FALLUJA/MOSUL - As volatile protests sweep through Iraq, decrying the government's chronic failures to deliver services and combat corruption, some of the country's most battered and neglected cities have also been the most quiet.

In areas that are still struggling to rebuild after being occupied and ravaged by the self-proclaimed Islamic State (IS) militant group, many residents say they are no less angry than the protesters who have taken to the streets in Baghdad and other cities in southern provinces – but they don't dare to protest themselves.