A protest movement is taking aim at the country’s entire political class, prompting a heavy-handed government response and raising fears of spiraling violence. 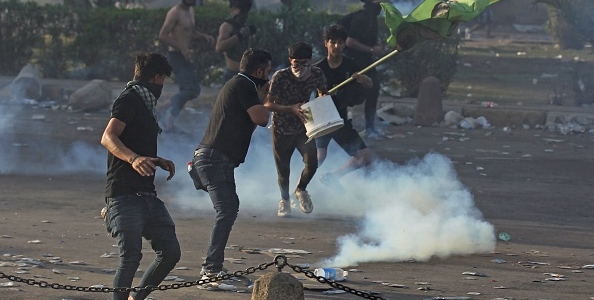 A protester runs to cover a tear gas canister with a bucket in Tayeran Square in Baghdad on Oct. 3, 2019. It was fired by Iraqi forces during the third day of clashes and demonstrations against alleged state corruption, failing public services, and unemployment. (AHMAD AL-RUBAYE/AFP/Getty Images)
By Staff of Iraq Oil Report
Published Thursday, October 3rd, 2019

BAGHDAD - Iraqi leaders from across the political spectrum are under siege as grassroots protests around the country decry an establishment that has failed for over a decade to combat corruption and deliver basic services.

Over the past three days, growing demonstrations around the country have aimed many of their slogans against the government of Prime Minister Adil Abd al-Mahdi, but even his political rivals have refrained from embracing the protest movement, which is widely seen as a threat to the entire political class. Protesters and security forces say the confrontations could escalate further on Friday.

"I don’t think any parties will benefit from from what is happening," said Hassan Fadam, a member of Parliament from Hikma, an opposition party. "Everyone loses."

Iraqi oil sites, production, and export operations have not been affected so far, according to several oil and security officials interviewed by Iraq Oil Report in every oil-producing province. But the grassroots nature of the protest movement makes it especially unpredictable, and security officials responsible for oil infrastructure in southern Iraq say they are bracing for an escalation.

The first seeds of protest were planted several weeks ago, as organizers began using social media to encourage Iraqis to take to the streets, apparently inspired by anti-government protests in Egypt. The first protests in Baghdad began on Oct. 1, with hundreds gathering in Tahrir Square; in other cities across southern Iraq, crowds of protesters initially numbered in the dozens.

The demonstrations, which do not appear to have been organized or backed by any of the country’s major political groups, gained unexpected momentum partly because of popular outrage over Abd al-Mahdi's recent decision to remove Lt. Gen. Abdul Wahab al-Saadi as the commander of the elite Counter Terrorism Service (CTS), which was widely seen as a humiliation of a hero from the war against the self-proclaimed Islamic State (IS) group.

Yet that is hardly the primary motivation behind the demonstrations. The most popular chants are calling for the downfall of the government, as protesters voice long-standing complaints about unchecked corruption, inadequate services, and high unemployment that have plagued Iraq under every government formed since 2005.

"We want to topple the current government and form a 'national rescue' government," said Abdul-Rahman al-Assadi, a civil society activist who has helped organized protests in Nassiriya. "Our demands are the demands of all Iraqis: jobs, homes for those who have lost their houses, better services, like healthcare and electricity, and to end the corruption and punish the corrupt. And that can be accomplished by changing the government."

As protests escalated on Tuesday and Wednesday, with crowds swelling from the hundreds into the thousands and advancing on government buildings, riot police in several cities used live ammunition to disperse crowds. The heavy-handed response now appears to be stoking additional outrage.

"One protester was killed by gunfire and tens of others have been injured," said Hussein al-Amil, a protest organizer in Nassiriya. "This was ordered by the police leadership, of course. These aren't individual actions. All of the policemen opened fire at the protesters. They could have used different methods to disband the protests, but they preferred to use live fire instead. The bloody way they oppressed these peaceful protests will push the people to use weapons and choose armed struggle."

While various authorities have given differing casualty figures, all accounts suggest that well over a dozen people have been killed nationwide and hundreds wounded in the past three days. In the latest violence, four demonstrators were killed in Amara on Thursday, where rioters had broken into the provincial council building, according to Missan province security officials.

On Thursday morning, Abd al-Mahdi declared a curfew in Baghdad. Internet access around the country has also been partially restricted.

In a televised speech late Thursday night, Abd al-Mahdi promised to "take action not to use force" in response to further protests.

Some security officials privately acknowledged the violence has already approached a tipping point.

"The situation is getting worse," said a senior Interior Ministry official. "Many security leaders are saying the situation would be out of control in Baghdad if the curfew hadn't been imposed today.... There were protesters killed, so we'll witness more violence."

A second senior Interior Ministry official said the government's strategy has been aiming to "prevent any escalation" by disrupting access to common protest sites.

In Basra, demonstrations so far have not targeted oil fields as they did during Iraq’s last major wave of national protests, in the summer of 2018. A senior Basra security official said there has been no interruption of oil field activity, and a Basra Oil Company official said exports are unaffected averaging 3.7 million barrels per day (bpd).

But security officials in the province are preparing for the possibility that protests could spread to oil sites.

Early on Thursday, the Basra Operations Command convened an emergency meeting, and the Iraqi Army and Oil Police were tasked with protecting the perimeters of oil fields and other infrastructure, as well as the airport; local and federal police were protecting banks and government buildings. A senior security official in Basra said all South Oil Police officers have been ordered to report for duty.

Activists and protestors said there has been a buildup of security forces in the city center.

In contrast to many previous anti-government protest movements in Iraq, rivals of the sitting prime minister do not seem to be promoting the protests or trying to capitalize on popular anger for their own gain -- nor is it clear they could, given the extent to which the demonstrations are railing against the entire political class.

Even the populist cleric Muqtada al-Sadr, who urged his followers in 2016 to storm the Green Zone in a high-stakes act of civil disobedience against former Prime Minister Haider al-Abadi's government, has recently urged restraint.

"Sayyed Muqtada al-Sadr stated that it is necessary for all of us to give [the prime minister] a chance to complete his reforms -- a chance which he was granted after he announced his intention to carry out a full reform package, without siding with any political party," said a statement from Sadr's office in Najaf.

Members of the Fatah bloc -- a coalition of parties affiliated with paramilitary groups operating under the government's al-Hashid al-Shabi (Popular Mobilization) program -- have been openly critical of Abd al-Mahdi since he took office, but they have also refrained from endorsing the protests wholeheartedly.

"The right to protest peacefully is guaranteed by the constitution," said Abed Aoun Taher, a member of the Irada party, which is part of Fatah. "But what happened from destroying buildings, blocking roads, and lighting tires on fire -- preventing people from conducting their daily lives -- is unacceptable."

One common theme voiced by political leaders is their wariness of a movement to bring down the government that is unlikely to be satisfied by the ascension of any other existing party.

"Nobody will benefit from this destruction, the fire, the chaos, the disorder," said Abdulhadi Mohan, a member of Parliament in Maliki's State of Law coalition. "There is an intention to destroy the state and the whole system."