Government efforts to contain the spread of coronavirus are increasingly affecting oil sector logistics, trade, and supplies of fuel and basic goods. 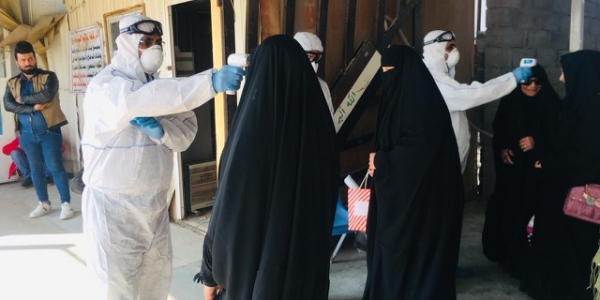 The new coronavirus (COVID-19) outbreak is posing a serious challenge to Iraq and its oil sector at a crucial moment of political transition.

So far, senior health officials said, five people in Iraq have tested positive: an Iranian student in Najaf and a family of four in Kirkuk who recently visited Iran. Iran has seen a sharp rise in the reported deaths from COVID-19 in the last week.

While Iraq's oil production has not been affected so far, foreign and national oil companies are making contingency plans for logistical disruptions, and some have already faced difficulty rotating foreign staff into the country.

A government directive on Feb. 26 ordered schools, universities and cafes to close nationwide until March 7 and public gatherings to be halted. Schools and universities in the semiautonomous Kurdistan region will be closed until March 10, according to a statement from the region's Council of Ministers.

Foreign workers at Iraq's largest oil fields have not been evacuated as of Feb. 25, according to several industry officials in Basra. Chinese workers who left Iraq before the outbreak are still banned from re-entering the country, said Khalid Wahim, the media director of the state-run Missan Oil Company (MOC). Ali Khudair Abbas, the the director of the state-run Dhi Qar Oil Company (DQOC), said in a statement that this policy is now extending to oil workers from other countries.

"Staff from foreign companies working in oil fields and sites [who have left Iraq] will not be allowed to re-enter the country during this phase, in compliance with the governmental and ministerial instructions," Abbas said.

Chinese workers who were living in Iraq before the outbreak have remained in the country and are able to work as normal, according to several Iraqi and industry officials; however, they are unable to leave their work site, according to Wahim.

Along with the provincial health department, MOC is "deploying medical teams in the field to conduct periodic tests, and a primary quarantine center was prepared in Halfaiya and Buzurgan fields in case of infected patients," Wahim said.

A Dhi Qar Health Department official said on Feb. 26 that two samples taken from patients suspected of being infected with COVID-19 were sent to Baghdad from the province for testing. A day later, the results of the testing came back negative, Dhi Qar Health Director General Dr. Abdul Hussain Al-Jabri said in an interview.

As a public health precaution, the use of finger print registration was stalled in the province, face masks are being distributed, and a Nassiriya burn unit had been converted into a quarantine center for those suspected of COVID-19 exposure, according to a medical official.

Adding to the sense of a growing crisis is the Iraqi government's own deep paralysis. Parliament failed to achieve quorum Thursday for a vote on the proposed Cabinet of Mohammed Allawi, who has been designated Iraq's next prime minister by President Barham Salih; a new session has been scheduled for Saturday.

First on the agenda of any new Cabinet will be dealing with public anxieties over food and fuel shortages and the limited capacity of the country's health sector to deal with a potential spike in COVID-19 cases.

On Feb. 24, Basra Governor's Office announced the renewal of a ban on Iranians entering Iraq via Shalamcha border crossing and Basra airport for 15 days. Iraqis re-entering from Iran are now supposed to undergo medical examinations before being allowed entry.

Missan Deputy Governor Khasib al-Hajaj said that al-Shaib border port was closed to travelers to prevent the spread of the virus, although Iraqi travelers returning from Iran will be allowed to re-enter, pending medical examinations. Traders were reportedly still bringing goods through al-Shaib border crossing in Basra and Mahran port in Wassit.

"The only port in Missan province is al-Shaib port and it is completely shut down," Hajaj said. "No Iranian travelers or foreigners are allowed to cross."

Thermal cameras have been put in place to monitor those entering from Wasit or Najaf, said Director of Missan Health Department Dr. Ali al-Alaq.

"Medical teams continue to follow up on the foreign workers in the investment companies in the oil fields, and provided an isolation hall for the suspected or infected cases," said Missan Health Department Media Director Mohammed al-Kinani.

The Kurdistan Regional Government (KRG) announced the closure of its border crossings with Iran on Feb. 24. The border closures initiated a run on gas stations in Erbil and Sulaimaniya on Monday, and shoppers were reportedly bulk-buying basic products.

Ali Tofiq, director of Parwezkhan Border-crossing, said in an interview that 24 hours after closing the border crossings, the KRG Council of Ministers decided to reopen them for trucks that carry oil products and other goods. Now, the exchange is slower due to some extra checking processes.

In a Feb. 26 statement, the KRG Council of Ministers said "the KRG will screen domestic and international tourists entering the Kurdistan Region, in addition to limiting their movements. No one will be permitted to enter the Kurdistan Region without the required medical checks."

An Erbil airport official said flights from Iran and Najaf have been cancelled and authorities are enforcing a ban on travelers from Iran, Italy, South Korea and Singapore.