Oil production and exports are stable in the short term, with potentially significant supply and demand disruptions if outbreak isn't contained. 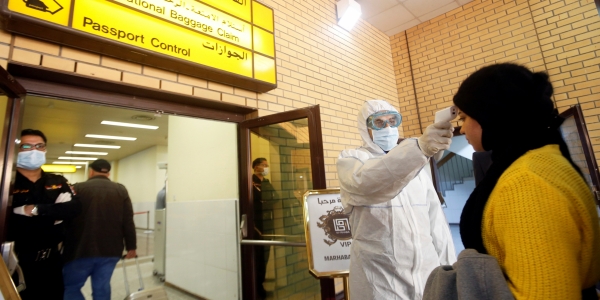 When senior officials at many Chinese oil and services companies working in Iraq departed in January, it was a routine rotation timed with the Chinese New Year holiday – until the World Health Organization (WHO) declared the new coronavirus outbreak a global emergency.

Since then, Iraqi officials have blocked entry of any non-Iraqi that has been in China and made it more difficult for Chinese oil workers who remained in the country to access – or leave – work sites.

"They are stuck in China and are banned from entering Iraq," said a senior official at a Chinese service company working in southern Iraq. "I don't think it will affect production of petroleum, but it will affect the company economically a lot."

Two Chinese workers were denied visas to return to work this month at the super-giant Zubair field, in Basra province, operated by Italy's Eni, according to a field official.

"The impact is obvious, due to the travel ban… especially for those companies that sent back most of key positions back to China for Chinese New Year," said a senior official at a Chinese oil company operating in southern Iraq.

Chinese oil companies are the operator or junior partner in developing fields producing about half of Iraq's oil, and dozens of sub-contracting companies that provide essential services, including drilling wells.

"I think the real impact will be on the inability to rotate personnel. That could get tricky," said an advisor to foreign companies in Iraq. "Many Chinese personnel tend to be reasonably senior, and are not here in absolutely enormous numbers."

On Monday, the WHO said more than 40,000 cases of coronavirus have been confirmed and more than 900 people have died worldwide, the vast majority in China where the outbreak is believed to have begun.

As a result, global oil demand is being suppressed, prompting an OPEC committee weighing the impact of two years' worth of production quotas to propose extending the cuts through the end of 2020.

There have been no reported infections in Iraq, but the Iraq Civil Aviation Authority (ICAA), based at the Baghdad International Airport, is carrying out instructions from the Ministry of Health, said spokesperson Jihad Kadhim.

International airports are staffed with Health Ministry officials in protective gear and equipped with thermometers, ready to quarantine anyone with symptoms or any Iraqi who has visited China.

"There is no exception for anyone coming from China," Kadhim said. "All companies, business people, etc. There is only one exception: for diplomats coming from China, but they should have a health certificate that they are free from this virus."

Representatives from Basra, Erbil, and Sulaimaniya airports all confirmed they were carrying out these instructions as well.

A previous ICAA statement said this protocol would last for a month, though Kadhim said it depends on orders from the Health Ministry.

Multiple senior staff at Chinese and Iraqi oil companies, service companies, and consultancies all confirmed that the new regulations were impeding business as usual, though temporary arrangements and delays are only expected to last until the threat of the virus has subsided.

The Zubair official said the rotation of Chinese workers has been halted "because there are fears they can't return to Iraq due to the airport, interior and health ministries' regulations, until further notice."

PetroChina, operator of the Halfaya oil field in southern Missan province, and the China National Offshore Oil Corp. (CNOOC), operator of a trio of fields in Missan, have kept staff in country, as have their sub-contractors, according to Khalid Wahim, the media director of the state-run Missan Oil Company.

"If any Chinese worker traveled back to China, they will not be able to return to the company despite their importance – not until the end of the disease in the world," he said. "The Chinese workers refuse to travel to China due to fears that they will be infected by the widely spread coronavirus in China, and they enjoy safety and security and health in the company's fields."

While some companies have also opted to extend rotation shifts, others are benefiting from good timing.

DQE International, a drilling subcontractor and one of the few Chinese firms in Iraq's semiautonomous Kurdistan region, still has time left in its staff's two month rotation, a senior company official said.

"It's still unclear whether the travel ban will be extended beyond Feb. 15," the official said. "The decision, however, will not affect DQE operations because the company was not on the brink of a staff rotation."

At the Gharraf field, in Dhi Qar province, workers from China Oil HBP Group were unable to return to complete a well connection project. A Tunisian firm was hired to finish it, according to a senior field official and a senior official at the state-run Dhi Qar Oil Company.

The senior official at a Chinese company operating in southern Iraq said a drilling project set for the middle of 2020 is still projected to start on schedule, on the assumption that "the virus things will be gone for a while."

It's not as simple as remaining in Iraq and carrying on as usual, however.

The senior official at a Chinese service company working in southern Iraq said "there are problems in issuing security clearances or border intelligence passes for our Chinese employees to enter the oil fields, as there are new procedures that require legitimate medical check certificates from Iraqi hospitals."

Without replacements or ability to leave, those still at oil field camps are stuck there, the official said.

"This is causing a lot of problems," the official said. "The majority of responsible employees are Chinese and local employees aren't given high positions in which we have some shortage in employees at the current moment."

Chinese workers in Iraq are seen as potential carriers.

"We are currently testing all the Chinese workers and checking their passports to learn about their entry dates to Iraq," Dr. Abdul-Hussein al-Jabiri, the director of the Dhi Qar province health department, said in a statement.

Any who arrived after the outbreak but prior to the Iraqi ban will be quarantined through a 14-day incubation period, then checked again before being authorized to return to work.

"But during this period they will be banned from working in the site," he said. "We also deployed attachés in these sites, and constantly follow up to prevent the return of the Chinese workers who left Iraq until this virus is over."

The longer the outbreak remains at large, the more medium term development and long-lead time projects become at risk, and the growing ties between Iraq and China chance fracturing at a crucial time.

There is some discussion by smaller Chinese sub-contractors to declare force majeure, though it's unclear if the moves would be contractually or legally sound.

"This is very premature," said the advisor to foreign companies in Iraq.

"The situation doesn't yet require that level of evacuation or the stage of emergency when a shutdown is required," the senior Gharraf field official said. "Things are normal and everything is going well."

If that's the case – either in reality or perception – then Iraq's precautionary health measures could risk offending the Chinese workers its oil sector depends on and the state-run Chinese companies that are seen by Iraqi government officials as long-term partners for development.

"I suspect that the practical effects of any order is less than the reputational effects, if Chinese contractors feel their pride has been dented," said a second foreign oil company advisor. "Chinese are sensitive about this – any perception of any racism or anti-Chineseness, being singled out."

"The Chinese people feel a bit down due to this," he said. "I would say that it's a very hard time for the Chinese companies in Iraq."