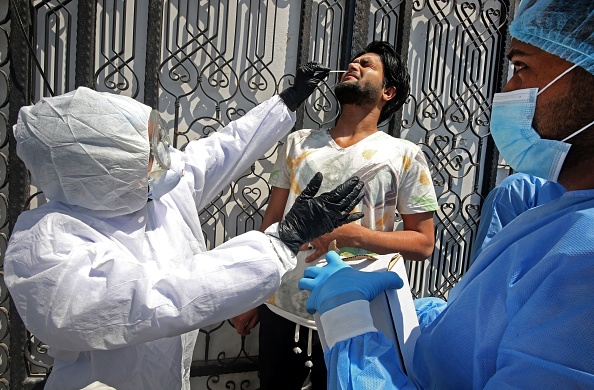 BAGHDAD - Iraq is expecting its first batch of coronavirus vaccines to arrive by the end of February, as rising case numbers fuel criticism of the government's pandemic response.

The doses are badly needed as a new wave of infections threatens to overwhelm Iraq's under-resourced healthcare system. Case numbers have been rising steadily since mid-January: 3,575 new infections were diagnosed nationwide on Feb. 18, compared to just 645 on Jan. 18.

Iraq's first shipments of vaccines are coming from three different manufacturers — 1.5 million doses from Pfizer, 50,000 from Chinese firm Sinopharm, and an unknown quantity of AstraZeneca doses via the global COVAX vaccination facility. Abdul Amir said the doses are scheduled to begin arriving before the end of this month.

After the priority groups are inoculated, plans are less clear for how the government will vaccinate the country's total population of 40 million. The broad contours involve more Sinopharm and AstraZeneca vaccines, and Iraq's Supreme Medicine Selection Committee is currently reviewing the Russian vaccine, Abdul Amir said.

"It depends on the vaccine availability," Abdul Amir said. "If we manage to deliver the vaccine to 30 percent of the people this year, this will be good."

The main barrier to wider and speedier inoculation appears to be the global supply of vaccines.

"Funds are available, but the international high demand makes it difficult," Abdul Amir said. "These companies suffer big pressure: we spoke with Sinopharm, they told us that they don't have enough, and they will only give us an urgent shipment. The quantity of vaccines in the world is low. Even neighboring countries didn't vaccine all of their populations."

A $100 million loan from the World Bank is funding Iraq's purchase of the Pfizer vaccine, while $168 million from the Iraqi Ministry of Health budget is paying for the AstraZeneca vaccine via COVAX. The Sinopharm batch is a donation from the Chinese government to Iraq.

The AstraZeneca vaccines are part of an agreement signed between Iraq and COVAX last September for 16 million vaccination doses, sufficient for 8 million people — 20 percent of the population. COVAX is an initiative co-organized by the World Health Organization (WHO), an international vaccine alliance known as Gavi, and the Coalition for Epidemic Preparedness Innovations (CEPI), which aims to help countries diversify vaccine sources and even out the access to vaccines between wealthier and poorer nations.

Iraq's agreement for the Pfizer doses followed in December.

Iraqi health officials are facing criticism for delays in the vaccine rollout, according to four Iraqi health professionals and analysts.

"The plans have been all over the place," said Sajad Jiyad, a Baghdad-based political analyst. "They should have made firm orders last year and given a date for when mass vaccinations would start. Public confidence is already low and the Health Ministry looks like it will struggle logistically to procure enough vaccines, store and transport them properly, and roll out en masse to the right people."

Once the vaccines arrive in Iraq, medical professionals fear that doses will not be equitably distributed or stored, with these challenges worsened by distribution decisions made on political bases. One doctor who has worked on a coronavirus ward in Iraq said that plans to prioritize vulnerable groups were "words on paper" and that the reality "differs completely."

"My personal expectation is that there is no control over the vaccine distribution," the doctor said. "In Iraq we have fractured governance, which doesn't have one systematized authority controlling it, so it's possible that this will be exploited and distribution will take place perhaps on the black market. Maybe there will be favoritism or similar."

The doctor also raised concerns over improper storage of the vaccines. The Health Ministry has distributed 50 deep-freeze units to hospitals throughout all governorates of Iraq for the Pfizer vaccine, which requires storage at -70 degrees Celcius and will only be administered in major hospitals that have constant electricity supplies.

According to Abdul Amir, vaccines for the Kurdistan Region of Iraq will be procured by the federal government, and distributed proportionally according to population size.

"We will give them their share and they will handle the distribution," he said. "We give them the share, guidelines, the plan, and training, sometimes in person and sometimes virtual."

Iraqi officials have blamed the recent severe rise in the infection rate on new coronavirus strains, which have proven more easily transmissible than the original strain.

"During the past three days there has been widespread transmission of the new COVID-19 strain, and more than 50 percent of the cases recorded in health institutions are of the new strain," said Health Minister Dr. Hassan al-Tamimi in a press conference on Feb. 18. "We have also signaled that there are serious cases among children and young people."

On Thursday, Basra health directorate chief Dr. Abbas al-Tamimi confirmed that 10 cases of the new strain had been admitted to health facilities in the governorate. The Health Ministry did not respond to a request for clarification over which new strain officials were referring to.

The rise in infections prompted federal Iraqi authorities to impose strict new lockdown measures in mid-February, including a full curfew on Fridays, Saturdays and Sundays, and movement restrictions between 8 p.m. and 5 a.m. throughout the rest of the week. Restaurants, shopping malls and other public places have been ordered to close. Masks must be worn in all public places and on public transportation, with violators threatened by a fine of 25,000 Iraqi dinars ($17).

The Kurdistan region has not imposed the new restrictions.

The federal Oil Ministry has ordered some additional mitigation measures. In an order dated Feb. 17, Firas Ali Mohammed Sadiq al-Sadr, the head of the ministry's administration and finance directorate, ordered all oil companies and training and development institutions to suspend work on Saturdays and to enforce disinfection measures and social distancing.

Security, health and oil officials in provinces including Kirkuk, Missan, Dhi Qar, and Basra said they have begun to implement the new lockdown directives and allocated healthcare resources to combat the rise in cases.

Although Iraqi authorities and the WHO have urged Iraqis to follow the latest measures, the government has not provided consistent enforcement, and much of the general public has not embraced social distancing, mask-wearing and other virus prevention measures. In December, the WHO also reported that Iraq was facing a "shortage" of personal protective equipment (PPE). The organization has so far provided Iraq's Health Ministry with $7 million worth of supplies, including PPE, test kits, ventilators, defibrillators, and intensive care unit beds.

Testing capacity has not increased as the pandemic has worn on, according to Ali Al-Mawlawi, an Iraqi policy analyst.

"A key area of concern is why testing capacity has not improved significantly over the past 12 months," Mawlawi said. "Iraq conducts under 50,000 tests daily, which is far too low for a population of 40 million. There may be reluctance from the general public to get tested, but that is why the government needs to be far more proactive about expanding community testing."

While Iraq's international borders will remain open throughout the latest lockdown, authorities will introduce a requirement for incoming travelers to provide evidence of inoculation in the future, as global vaccination rates increase.

"The vaccine passport can't be implemented now, while many people still haven't had the vaccine," explained Abdul Amir. "I don't think Iraq will demand that now — it is difficult. But in the future, yes, for sure." 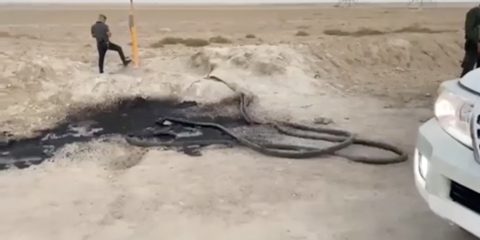 Smuggling bust unravels into scandal of murder and political intrigue 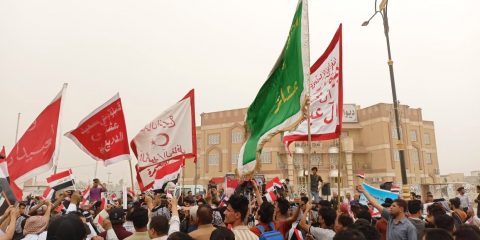