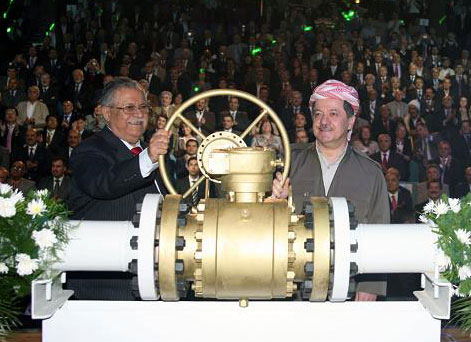 BAGHDAD - Oil tensions appear to be easing between Iraq’s central government and the northern Kurdish region, at least a temporarily. Following high-level meetings here on Monday, the semi-autonomous Kurdistan Regional Government (KRG) will resume exports via Iraq’s pipelines beginning Feb. 1, at rates that will reach 100,000 barrels per day (bpd).

Iraqi Prime Minister Nouri al-Maliki and other key Baghdad officials hosted a delegation from the KRG, which was led by Kurdish Prime Minister Barham Salih and included Ashti Hawrami, the KRG’s minister of natural resources. Following that meeting, officials from both sides confirmed that pipeline exports would re-start from two Kurdish fields, Tawke and Taq Taq, which are being developed, respectively, by Norway’s DNO and Genel Enerji (in partnership with Sinopec of China).