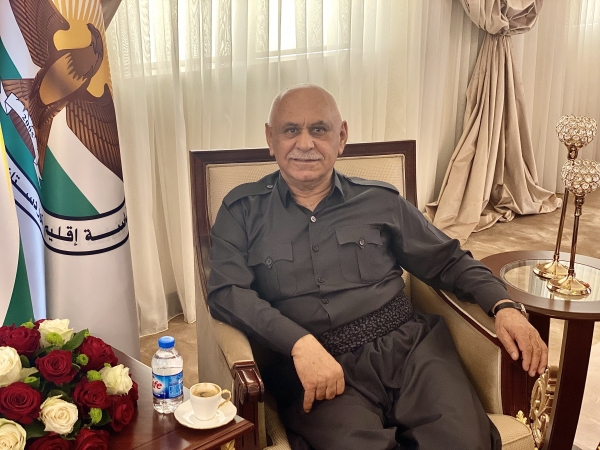 ERBIL - Vice President of the Kurdistan Regional of Iraq (KRI) Sheikh Jaafar Sheikh Mustafa – a longtime Peshmerga commander and senior member of the Patriotic Union of Kurdistan (PUK) party – is a central player in several key political and security issues.

Remnants of the self-proclaimed Islamic State (IS) group have increased their attacks across much of northern Iraq, including attacking electricity infrastructure and setting up fake checkpoints in territory under control of the Kurdistan Regional Government (KRG).

Meanwhile, the PUK’s leadership structure is undergoing a seismic shift, complete with threats of violence and arrest in a power struggle that, which has increased tension in the portion of Iraqi Kurdistan under the party's control.

Sheikh Jaafar, as he is known, is the former Minister of Peshmerga and commander of the PUK’s so called 70 Forces, which includes several brigades and special battalions of PUK-controlled Peshmerga. Until 2018 he was a member of the PUK politburo.

He has been KRI vice president since 2019 and is still focused on the military mission, meeting frequently with senior commanders in the U.S.-led international coalition supporting the fight against the remnants of the IS group.

Despite a recent agreement between federal Prime Minister Mustafa al-Kadhimi and U.S. President Joe Biden over the withdrawal of U.S. combat troops from Iraq, the Sheikh Jaafar is calling for continued international support as "an absolute necessity." Longstanding territorial disputes between federal and KRG forces have meant there are gaps that the IS group can exploit, despite the recent formation of joint coordination centers. He's calling for the al-Hashid al-Shaabi (Popular Mobilization Forces) to be replaced by the Iraqi Army in the disputed areas.

Closer to home, Sheikh Jaafar said that impropriety by some local powerbrokers has negatively impacted the investment climate in Sulaimaniya.

He spoke with Iraq Oil Report this week in his office at the Kurdistan Region Presidency building in Erbil.