The financial crisis continues to compound the pandemic as Iraq faces a shortage of oxygen, supplies, and health care professionals. 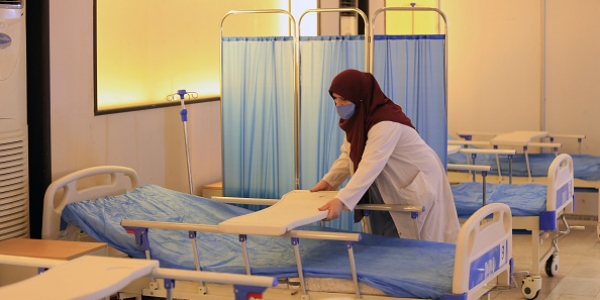 A healthcare worker prepares stretchers at the Baghdad International Fairground, which has been temporarily turned into a hospital in fighting against coronavirus pandemic, on July 18, 2020. (MURTADHA AL-SUDANI/Anadolu Agency via Getty Images)
By Lizzie Porter and Staff of Iraq Oil Report
Published Friday, July 31st, 2020

Iraq’s financial crisis has left the state unable to hire tens of thousands of newly trained medical personnel who could help relieve pressure on a healthcare system struggling to contain the coronavirus pandemic.

Staff shortages, as well as scarce oxygen and equipment supplies, are severely hampering COVID-19 containment measures, according to nine doctors, medical graduates and researchers in Iraq.

“Not hiring the new graduates will impact negatively on services, because there is a shortage in the number of doctors,” said a Baghdad-based official at the Iraq Medical Association, which represents healthcare professionals.

The inability to bring new doctors and nurses into service in the midst of a global pandemic is one sign of the depth of Iraq’s financial crisis. The state’s failure to maintain the power grid is also causing prolonged electricity cuts, and slow public sector salary payments have sparked unrest among government workers, including oilfield contractors.

Iraqi Prime Minister Mustafa al-Kadhimi's government prompted an outcry among more than 30,000 recent medical graduates in May, when it issued an order authorizing the Health Ministry to “make contracts with retired doctors or graduates who wish to volunteer to work to contribute to fighting the coronavirus,” on the condition that government health directorates “do not shoulder any financial obligations."

Iraqi medical graduates are usually hired in paid roles in hospitals to continue their training on the job, but the Ministry of Health on June 15 issued a memorandum saying that graduates could work in state health departments as volunteers and count that service as residency training.

Graduates have widely shunned signing up to work for free.

“How do the minister, parliamentarians and others politicians accept me working as a volunteer in the most dangerous places for the spread of the coronavirus, with very simple personal protection… as they sit on fancy chairs?” said Hassan, 25, a nursing graduate from Najaf, one of three medical graduates interviewed by Iraq Oil Report.

The three said a collection of graduates had offered to work in exchange for the guarantee of deferred salary payments, but their proposal had been rejected by the Ministry of Health.

A spokesperson for the Ministry of Health could not be reached for comment.

The government this week partially reversed its prior decision, authorizing the hiring of about 2,500 new doctors, who will expect to receive salaries of $700 a month. That still leaves nearly 30,000 recent graduates from other specialities, including nursing, pharmacology, and dentistry, out of work, according to figures listed in a Finance Ministry memo.

Workers demand to be paid

The government is failing to hire medical personnel even as the pandemic puts new strain on a health system that was already short of doctors.

Over 1,300 doctors have been infected with coronavirus, 30 have died, and another 3,000 have been instructed to take early retirement, adding to the pressure on hospitals, according to Mac Skelton, director of the Institute of Regional and International Studies (IRIS) in Sulaimaniya.

“When you already have a shortage of doctors and you’re limiting the appointment of new doctors, in a pandemic situation, this creates quite a problem, because you actually need excess of doctors,” said Skelton, who has done in-depth research on Iraq’s health sector. “When you have infected medical personnel, you need to be able to quarantine them, and to take them out of circulation. But when the hospital staffing is so tight, and you’re already operating at a shortage, this kind of situation exacerbates infection control, because you basically have hospital directors who are oftentimes reluctant to allow doctors to quarantine, because they realise that there is a shortage already.”

Several Iraqi doctors working in coronavirus wards confirmed they are suffering from such shortages.

"When the schedule is tight, and someone goes off, someone has to cover for that work," said a doctor at Baghdad’s Al Kindy Teaching Hospital, which is a dedicated coronavirus treatment unit. "So there are either changes of shifts or cutting of your time off, to cover for the shift of your infected colleague.”

The Health Ministry has not been able to hire new doctors partly because the previous government, led by former Prime Minister Adil Abd al-Mahdi, failed to pass a 2020 budget, meaning that no money was allocated for new salary payments, according to the Iraq Medical Association, which said it raised the issue with the prime minister and Ministry of Health.

“The answer at the beginning was that there was no financial budget allocations and that no budget had been passed,” said an official from the Iraq Medical Association. “This week the prime minister sent a letter to the Ministry of Health informing them that it can manage and employ them. But I think the Ministry of Health hesitates to employ doctors without other graduates from pharmacy, dentistry, nursing and other health professions – they fear their reaction and demonstrations.”

In June, in lieu of a budget, the Parliament passed an emergency financing law authorizing the government to borrow nearly $18 billion, mainly to cover the payment of public sector salaries and benefits, which cost the state about $5 billion per month. But failing to hire large numbers of medical graduates suggests that not all ministries are receiving adequate allocations.

Iraq initially managed to contain the new coronavirus, even as it spread across Europe and other parts of the Middle East. But in the past month, case numbers have increased dramatically – a rise that medical professionals attribute to non-compliance with social distancing measures, poor hospital administration, and a general lack of public trust in the healthcare system.

Iraq is now recording around 2,500 new cases and 80 to 100 coronavirus-related deaths every day, and the mounting scale of the crisis prompted Prime Minister Mustafa al-Kadhimi to order a full lockdown for the Eid al-Adha holiday period, which extends until Aug. 9.

Despite the increasing infection load, Iraq has gradually reopened its borders: Baghdad International Airport reopened on July 23 and multiple land crossings with Iran have restarted traffic flows. According to Skelton, it is unclear whether easing those restrictions will lead to more infections, because there was still substantial cross-border traffic under the previous lockdown rules.

“It’s not to say that it’s not an issue – it’s certainly an issue – but it’s also not as if we’re going from a situation of non-movement to movement,” said Mac Skelton. “There has been movement and it will just be a question of the intensity of it now, and [the effect] remains to be seen.”

Iraqi hospitals are suffering from not only a lack of doctors but also inadequate supplies.

“We’re a mess,” said one Basra-based doctor, when asked how hospitals were dealing with the rapid increase in coronavirus patient numbers. “We have problems with the oxygen supply every day. It's never enough. Some of it comes from the government, but we're getting a lot of supplies – mainly oxygen – from the Popular Mobilization Forces, the Basra Oil Company, and others.”

Two Baghdad-based doctors also described oxygen shortages, which they said were a result of a payment dispute between health authorities and a private supplier. As a result, their coronavirus wards have been relying on oxygen cylinders instead of a centralised tank-and-pipe distribution system.

“The hospital I work in has central oxygen, but very little, and as a result only the Respiratory Care Unit patients have it. The rest of the patients are on cylinders,” said a doctor at Ibn al-Khatib coronavirus hospital. "It’s a very distressing situation, to be honest – there are cases who are on oxygen 20 hours. It’s not tenable.”

The doctor at Al Kindy Teaching Hospital, who requested anonymity over fears for his job security, said that staff and equipment supplies were adequate at present, but may not hold out if the coronavirus continues to spread.

“Unil now it's manageable,” he said. “We [the medical staff] were already low in numbers before the pandemic so we got used to taking care of a large number of patients. But for how long? I don't know.”

The number of political and security officials affected by COVID-19 also continues to grow, following outbreaks at a military base and confirmed cases among paramilitary units operating under the government's al-Hashid al-Shabi (Popular Mobilization) program last month.

Brig. Gen. Zaki Yahya Alwan, commander of the Ammara Oil Police Battalion in southern Iraq, died after being infected with the coronavirus this week, according to a Missan Oil Police official.

The mayors of both Madena and Qurna districts in Basra province, the hub of Iraq’s oil industry, said they tested positive for coronavirus last week, prompting the suspension of work at the two district governments as a precautionary measure.

But funding and supplies could take time to reach coronavirus wards, which are still struggling to cope.

“We're doing what we can, but it's still not nearly enough. Not enough intensive care unit (ICU) beds. Not enough respiratory machines,” said the Basra-based doctor. “We really beg for oxygen from whomever we can reach.”