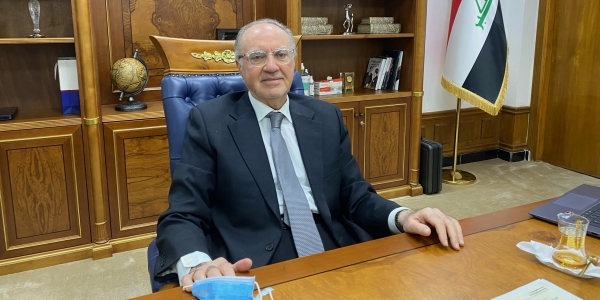 BAGHDAD - Despite a rise in oil prices that has recently eased some of the immediate pressure on Iraq’s finances, the country continues to face a deep economic crisis, with the government struggling to meet its spending commitments while adhering to oil production cuts imposed by OPEC-plus.

The man in charge of this balancing act is Ali Allawi. Not only does he lead the Finance Ministry, but as deputy prime minister he also has overarching responsibility for the energy portfolio.

In an interview with Iraq Oil Report at his office in Baghdad on Thursday, Allawi said Iraqi officials are working on a new proposal for how OPEC should distribute future cuts among member states to ease the pain of countries like Iraq that are especially reliant on revenues from crude sales.

"There are probably about 20 to 25 variables that go into it — and they should be properly weighted, so that the cutbacks are allocated in an equitable way," Allawi said. "Perhaps during this cycle it might not be possible or appropriate to raise this, but... it should be looked at in a fundamental way, so we set the stage for a much more equitable distribution of the burden in future cutbacks."

Allawi warned that Iraq needs to be cautious about taking advance payments for future oil exports, following Iraq’s deal with China's ZhenHua to pay up front for about $2 billion of exports. While Allawi said that such deals present "an interesting diversification opportunity" so long as they are "used moderately and absolutely where necessary," he also appeared to cast doubt on Iraq's ability to meet the terms that buyers might be demanding.

"The main issue for us as the Ministry of Finance is that we’re not prepared to give a sovereign guarantee to future deliveries," Allawi said. "There may be other forms of performance guarantees that don’t have a sovereign aspect to it — they may be looked into — but generally I think where these proposals fall flat is when they demand a sovereign guarantee."

Iraq has yet to pass a 2021 budget, with major divisions around the budget allocation for the Kurdistan Regional Government (KRG). Allawi conceded that "fudging' may be required to pass a spending plan acceptable by all parties — or that the KRG representatives in the federal Parliament may refuse to vote through the spending plan.

Allawi also spoke with Iraq Oil Report about high-priority projects to increase the capture and processing of associated gas that is generated as a byproduct of crude oil production, as well as the status of a detailed roadmap to institute "root and branch" economic reforms.