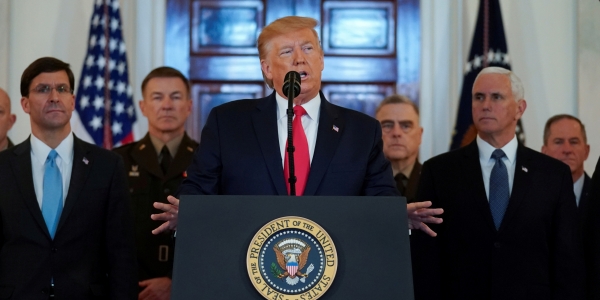 Conflict between the U.S. and Iran is raising new fears over the extent to which Iraq could be affected by American sanctions, which have the potential to devastate the country's economy.

"If they do ask us to leave, if we don’t do it in a very friendly basis, we will charge them sanctions like they’ve never seen before, ever," Trump told reporters. "It'll make Iranian sanctions look somewhat tame."

Since then, tensions between Baghdad and Washington have eased a bit, though they remain badly strained following the U.S. drone strike that killed Iranian Quds Force commander QassimSoleimani and Iraqi paramilitary leader Abu Mahdi al-Mohandis on Jan. 3. Iraqi Prime Minister Adil Abd al-Mahdi signaled in a meeting with U.S. Ambassador Matthew Tueller on Monday that Iraq is seeking "joint action" with the U.S. for the departure of troops, avoiding for the time being a unilateral decision that would compel an immediate withdrawal.

According to one U.S. official and another person briefed on the issue, the Treasury Department is developing detailed options for primary sanctions on Iraq, though such a policy process within the bureaucracy does not by itself signal a political decision to impose such measures. If Trump does decide to go ahead with primary sanctions, however, he has broad, unilateral authority to do so.

"This can be done by executive order, by the president alone," said Kenneth Katzman, an expert on sanctions at the nonpartisan U.S. Congressional Research Service. "The field is open. They could be on the oil sector, the banking sector, shipping."

Even if relations with Baghdad improve to a point where Trump does not pursue primary sanctions against Iraq, his promise Wednesday of escalating sanctions pressure on Iran appears to raise the likelihood that Iraq could suffer indirectly, as scrutiny rises on the extensive economic ties between Iran and Iraq.

Iraq currently benefits from temporary waivers on certain U.S. sanctions against Iran, enabling the government to avoid penalty while paying Iran billions of dollars for electricity and natural gas imports, responsible for about one-third of Iraq's power supply. Such waivers have been granted five times since Nov. 5, 2018, when the Trump administration reimposed sanctions that had been lifted under the Obama-era Iran nuclear deal.

The U.S. has been granting extensions on the condition that Iraq begin weaning itself from Iranian energy, according to several American and Iraqi officials working on the issue.

"To avoid sanctions over the long term, Iraq needs to reduce its dependence on Iranian energy, and ultimately end those imports entirely," a senior U.S. official told Iraq Oil Report in a March 2019 interview. "If they're making progress toward that goal, it's a powerful impetus to maintain the waiver."

The current waiver is set to expire Feb. 13, and officials on both sides had broadly anticipated another extension.

Over the past year, Iraq has begun implementing a series of projects to increase the capture of associated gas that is generated as a byproduct of crude production, much of which is currently burned off as waste. In combination, those projects – a new processing facility for the Basra Gas Company (BGC), and new infrastructure at the Halfaya, Nassiriya, and Gharraf oil fields – are set to add at least 900 million standard cubic feet per day (scf/d) to Iraq's gas supply, which is nearly equal to the amount imported from Iran.

Iraq has also built out its power generation capacity, adding about 3,500 megawatts within the past year, according to Electricity Minister Luay al-Khatteeb. Those gains are expected to continue in 2020.

"We're talking about close to 4,000 megawatts that could enter service this year," Khatteeb said in an interview with Iraq Oil Report.

Khatteeb and other Iraqi energy officials admit they have also suffered frustrating delays stemming from political meddling, limited institutional capacity, financial constraints, and a destabilizing protest movement. But even if progress is slower than desired, significant new domestic energy supplies are coming online.

"The expectation when these waivers were first granted was that it's an ongoing project: Iraq is trying to become energy independent, but there was no indication this was going to be done by February 2020," said Sajad Jiyad, the managing director of the Bayan Center, a Baghdad-based think tank. "Three days ago, I would have told you another waiver will be granted. If the waiver's not granted, it's a serious step."

Iraq almost certainly could not end its Iranian energy imports, which would expose it to various potential penalties, according to Katzman: Iraq's state-run oil companies that import Iranian gas could be penalized, or the Trump administration could even freeze the billions of dollars in oil revenue that Iraq holds in accounts at the Federal Reserve Bank of New York, and deny access to U.S. currency that supports the value of the Iraqi dinar.

"Potentially, yes that could be attached," Katzman said. "It's not automatic. First Iraq loses the waiver and [the Treasury Department] theoretically could determine the Central Bank of Iraq is in violation of the act, and assets [would be] impounded."

Even if the waiver is extended, Iraq could still be vulnerable to increased U.S. pressure.

Ahmed Tabaqchali, the chief investment officer of Asia Frontier Capital, said it has been easy to take for granted several ways in which Iraq benefits from being a close U.S. ally, including American leniency with standards imposed on Iraqi financial institutions.

"Up until now, they've been treating us with kid gloves," Tabaqchali said.

The Central Bank of Iraq (CBI) depends on the U.S. Federal Reserve to access the U.S. dollars Iraq earns through oil sales, which also support the Iraqi dinar. Those dollars are injected into the Iraqi economy mainly through local banks, which have no means to trace the frequent, large withdrawals of hard currency that are typical in a cash economy like Iraq's.

"The Treasury Department enforces these things," Tabaqchali said. "They could do a compliance check on the CBI: 'How can you be sure, CBI, that you're not giving dollars to sanctioned entities? How can you be sure cash doesn't leave Bank X, Y, or Z, and end up in Iran?"

The U.S. made such a compliance push in 2015, animated by a concern that lax financial controls were enabling the self-proclaimed Islamic State (IS) militant group to indirectly access dollar markets. That brief initiative caused the value of the Iraqi dinar to plummet as banks were restricted access to U.S. currency and dollars became scarcer.

"They slowed down the flow of dollars, and the price in the market shot sky-high," Tabaqchali said.

One U.S. official said the Treasury Department is now examining the possibility of renewing such a compliance push. Queries to both the Departments of Treasury and State were not addressed in time for publication.

Iraqi currency markets appear to be nervous. The street value of the dinar briefly dropped by more than 2 percent earlier this week.

The prospect of financial penalties from the U.S. is especially frightening for Iraq because it has little domestic industry and an economy that has never diversified away from oil. If the value of the dinar plummets, imported goods will become more expensive with little domestic infrastructure to provide cheaper alternatives.

"Iran can survive sanctions, barely, because of its large industries," Tabaqchali said. "People in Iran say prices have doubled or more since last year, but shelves are full. We [in Iraq] don't have an industry. Look what happened to us in the 1990s. What have we done since then? Nothing to improve our ability to withstand being away from the financial system and global trade."

In the extreme case, primary sanctions against Iraq could plunge the country into the kind of widespread deprivation that Iraqis suffered during the Saddam Hussein regime, the memory of which still haunts all but the youngest generation of Iraqis.

Even a mild economic downturn could also undermine some Iraqi plans to develop its energy sector, which are already constrained by a small government investment budget and limited access to financing, and would likely cause the Iraqi government to rush toward American rivals for economic partnerships.

Iraq has recently been pushing a deal forward with China that promises to open up $10 billion in financing for infrastructure projects, guaranteed by future Iraqi oil deliveries.

Abd al-Mahdi met with Chinese Ambassador Zhang Tao on Tuesday, and the Prime Minister's Office released a statement affirming Iraq's intention to move ahead with the financing deal.

"Our people clearly recognize its importance," the statement said, "and we will work to achieve it without delay." 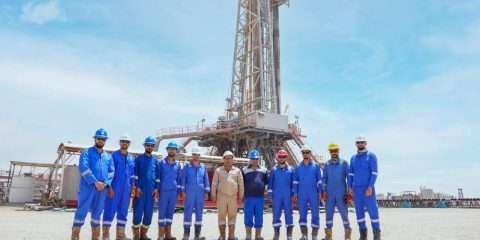